So, me and my wife got home from Ikea with a new Billy bookshelf for the dinning room (aka, book room #2 — book room #1 is the living room). We lucked out and found a spot nearly in front of our house, right on the outside of the curve that our house in on.

We unloaded the shelf (it weighs a bloody ton) and had just finished getting it together when I heard a bang noise. I thought perhaps the storm door was open and the wind pushed the door open or shut.

I went to the door, checked the storm door; it was closed. The wind was fierce outside and I could see snow starting to stick. It had been snowing on and off all day and this is the second time it had started to stick. 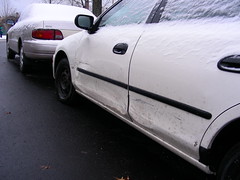 After a while, I heard another bang; it sounded like the storm door as well. I asked Robin, “I keep hearing that noise. What could it be?” She thought it was the storm door. “Can’t be I checked it. It was latched.”

She gets up and goes to check. I hear her fiddle with the door and then I hear her yell out, “Our car was just hit!“.

Here is what happened. Apparently the first bang was the car in front of ours being hit. There was a note and dent on his car. The second bang was our car being smacked into. There were two people outside asking if the white car was ours. Yes indeedy, it was.

I went outside, sent their plate and car details to Jott, checked the damage (driver door was badly dented and scraped and the mirror housing was cracked, but the mirror seemed fine) and invited them in to our warm house to swap information. While Robin gathered the info I excused myself to go move the car.

I got outside and my neighbor pointed to a mini-van pointing the opposite way on the street, “You see that mini-van? It nearly hit your car, it spun around and stopped where it is!” I just stared. I decided I better move the car fast. I was on the side walk, waiting for the 4 cars to go by when… bang! Another car hit our car.

I just couldn’t believe it. Two guys get out and ask whose car is that. My neighbor just points at me. I turn to the two guys and say, “Welcome to the party!” I send their plate and car details to Jott, check out the new dents and scrapes on the rear driver side door and get in the car. And as quickly as I can, I park on the other side of the street.

When I go to cross back, I have to wait for huge salt truck to go by. “Thank god!” I yell. The guy stops to look at me. I tell him about my car just being hit twice in 5 minutes. He tips the bed on the truck back a little and pours some extra salt on the spot.

I thank him and walk across the street. The whole street is black ice; I nearly slip twice walking across. I never slip when walking on ice (even in the flip-flops, which I was wearing).

I go back inside and invite the two new participants to our little party.

After everyone had left, when Robin explained all this to our insurance they couldn’t believe it.